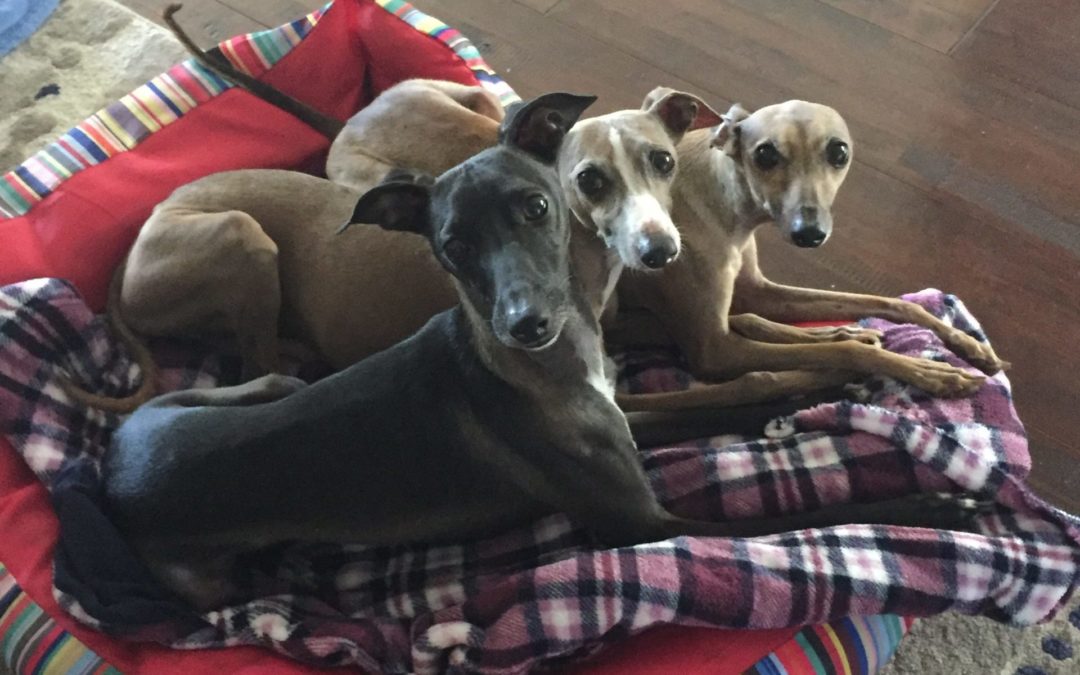 Life is not a race to the finish! Life is a banquet of options from which you must choose how you want to live.

These three scoundrels provide me with a constant source of love, laughter, and learning. Meet my Italian Greyhounds (Iggy’s) Merlin, Leonard and Mocha. I’ve been reflecting on the impact they have made on my life and why. Each has contributed, according to their personality, to my development as a human. They have enhanced my ability to see the world from different perspectives. Most importantly, to do so without judgement.

Leonard (now coming up nine years old) was the first Iggy to enter my life. He came at a time of massive change in my life. I had given up living in Chicago, moving back to the leafy outer suburbs of Brisbane, Australia, for the love of my life. My work in international trade had come to an end, my life had been turned upside down, and I was struggling to find a way forward. Iggy’s are renown for being slow to trust humans, maybe that’s because of their tiny stature standing around 30-35 cm (12-14 inches) at the shoulder and weighing in between 4-6 kg (9-13lbs) they are hardly heavyweights of the dog world and then there are their long legs! No wonder they’re cautious. Winning trust was the first item on the agenda, and the first lesson Leonard taught me.

My tone of voice was one thing but what mattered more was my intent. Iggy’s seem to be able to mind read. For example, if I think of going to the fridge and they will get there before I arrive! If I wanted Leonard to come on command, it was not enough that my voice was calm. My voice had to reflect my mindset. When I called him unless my mind was calm, he simply wouldn’t come. There is no chasing an Iggy! They are capable of speeds approaching 40 Kph (25 Mph), so I had to learn to calm my mind, especially in those tense moments where the pressure is on, and tempers are rising. Initially, he deemed to sit on command rather than run, and once I had sufficient training under my belt, he came on command because he felt safe.

Make Space For YOU – You are Ergo You Matter!

Mocha was next to arrive and came under rather sad circumstance as we had just lost another little fellow we had, Silvio, to meningitis. Mocha doesn’t do “being” a dog! I mean he is a dog, but he doesn’t particularly like other dogs or doing doggy things, like going to the dog park. When forced to do such a terrible thing he would simply go from human to human looking pitiful until they pick him up… Now he’s happy! Mocha brings what he wants to him; he does not pursue or even harass, except for wanting to be picked up and cuddled. Even then, when he has had enough, he will up and leave. Mocha makes it all about meeting his needs. My next lesson was to make sure I made space for what I need.

Being the dog he is, Mocha sets a glowing example of how to co-exist without being co-dependent. He is all about setting boundaries. He will cuddly into you very contentedly until he decides it’s time to go then he will just up and go for no apparent reason but his own. Even though he is a tiny dog (lower end of the scale above), he is unequivocal on his importance and place in the world. The lesson being you do not need to be big, loud, strong or outwardly important to put your needs first. You are ergo You matter, and You are here for a reason, look after yourself and do not be browbeaten or coerced into compromises that are contrary to your well-being. Another valuable lesson learned!

Life is Meant to be Enjoyed – Stop Overthinking it!

Finally, we come to the class clown, every pack needs one, and ours is Merlin. Born one of 13 (yes 13) brothers his first 12 weeks of life were no doubt a helter-skelter blur. Upon arrival here, he was greeted by his new brothers and soon settled in as the dumb kid on the block forcing the older guys to play and amuse him. Merlin’s only time on his own in his entire life was the time it took for him to fly from Melbourne to Brisbane (about a 2-hour flight). Merlin thinks he is 12 foot tall and bulletproof; he is the biggest of our boys leaning towards the top end of the scales, still petite) and now days tends to dominate albeit unintentionally, he’s clumsy and like many teenagers not particularly thoughtful before he leaps into action!

Merlin is a product of always being loved and part of a family. He has never been on his own for more than a few hours and then only the once. The only trauma Merlin has ever suffered was swapping families. He thinks he’s a rock star and maybe he is; demonstrating daily the importance of love and connection in our lives. Merlin is confident he is safe and loved and never doubts it for a moment. He is brash and yet entirely vulnerable, he doesn’t give a thought to whether he will be ostracized or excluded. Those options don’t exist in Merlin’s world! It could be argued he doesn’t think a lot as a young dog, but even that is a lesson… Life is meant to be enjoyed, stop overthinking it!

Life is a Banquet of Options

That’s what my three characters have taught me so far, that and fact they love me even if I do make them wait for their food.

Stay calm under fireMake space for youLife is meant to be enjoyed.

Life is not a race to the finish! Life is a banquet of options from which you must choose how you want to live. If that banquet is not apparent to you, here’s a simple solution. Start living life with a question mark. Question everything and look for evidence to verify why you should accept an assertion as the truth. Keep digging, and your banquet of options will slowly emerge as your perspective on life changes. Life can be whatever you want it to be and no matter what your mission is; remember.

Stay calm under fireMake space for youLife is meant to be enjoyed.

I’d love to be of assistance to you if you would like to talk more about living your life your way or simply taking the next step on your journey. Why not book an obligation-free chat by clicking on the link below

And while you’re in the sharing mood send me your stories about what you dogs have taught you… I’m sure I’m not alone!