Holding my ground and looking ‘nasty’ in the eye: 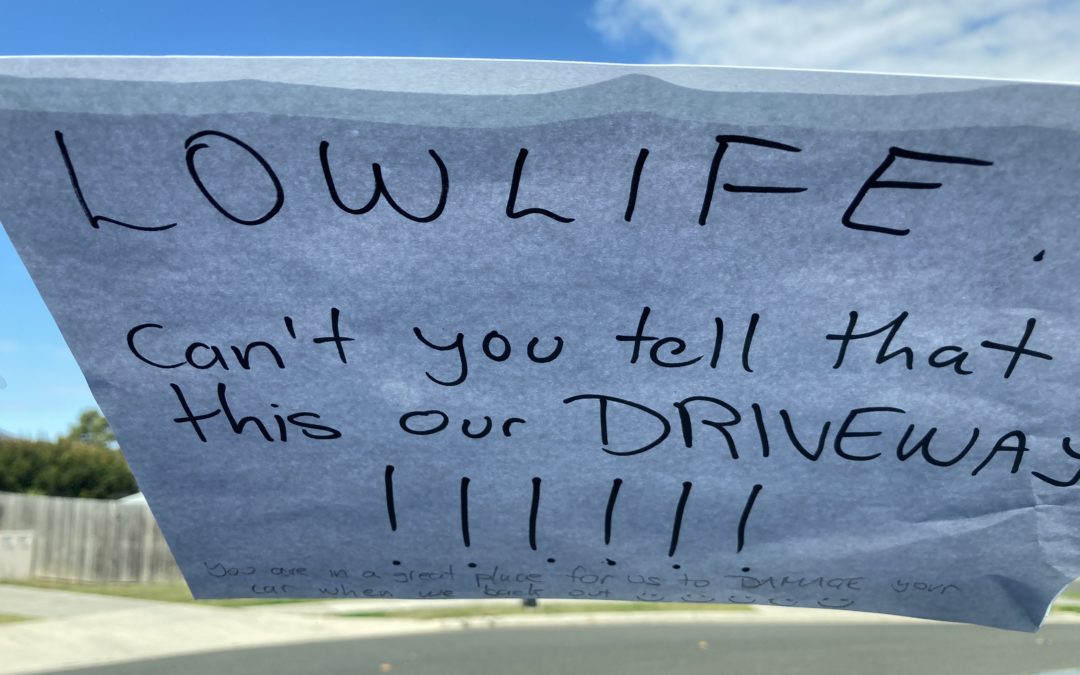 The world has been turned upside down lately. COVID 19 has turned a promising year into a shocker. Tempers are fraying, people are hurting and what I know about people is when they hurt, sometimes they lash out. Ordinarily, those same people might be quite pleasant. This is a time of unprecedented pain for many. As Brene Brown says…

“Pain that is not transformed will always be transmitted.”

When this happens, we end up living that reality we create for others. It acts as a contagion of sorts, and it impacts those around us.

I had my own experience of this yesterday when I went to visit a friend. I unwittingly parked my car partially over the driveway of the neighbouring house to where I was visiting. When I went to leave, I jumped into my car and saw a carefully placed message letting me know, in NO uncertain terms, that I had parked them in. How they felt was about that was clear.

That’s the first thing I saw when I got into my car. That’s the label she chose for me. I regard myself as a respectful person. And, I’m a recovering pushover. There was a time when I would have removed the offending piece of paper from my windshield, screwed it up in disgust, swallowed my emotions and just driven off.

Those days are passed for me. I respect myself more these days.

Besides, I train people in how to be assertive for it is a fact of life that our gifts come from our struggles. Assertiveness requires me to act. But, act in a way that considers the needs of all involved. It means having a high degree of self-respect and communicating openly and directly. It’s about having strong boundaries and pushing back on ‘bad’ behaviour. So, to have integrity, I was compelled to act. And, act I did.

I owed an apology. There was no question of that in my mind…

High up on an outdoor deck of the sloping block, was a woman in her 60’s. After apologising I let her know that not only was I sorry for putting her out, I hadn’t seen the driveway. The driveway was a concealed driveway and it was clear from her protestations, this happens a lot. She told me, “I’m not very happy with the world. I’m 60 and I’m grumpy”. As if there is somehow a causal relationship between her age and her demeanour, and she has a right to tell the world”.

She played a ‘card’.

In her case, it was an age card. When it comes down to it, the card she played became the justification for why she gave herself permission to write that note. A note that was passive-aggressive and a key characteristic of passive-aggressive behaviour is to undermine the self-esteem of others. It’s the ultimate in a lose-lose mentality as evidenced by “You are in a great place for us to DAMAGE your care when we back out 🙂 🙂 🙂 ”

I looked her straight in the eye when I engaged her. It takes something to continue to hold a nasty stance when you are confronted with the fruits of your behaviour. Justifications aside, she backed off when I approached. As bullies often do, no matter their age.

As I said, I’m a recovering pushover but that doesn’t mean the nastiness of her note didn’t taint the day a little. I struggled to hold back the emotion as I apologised. I don’t know whether or not she saw that, whether or not it registered with her.

All of that is secondary.

I stood up for myself. I owned my mistake and I held my ground. Maybe she will think twice about writing nasty notes in future, and maybe she won’t. The important thing is I sent a clear message regarding what is acceptable behaviour. I also sent a clear message to myself and that matters most in the scheme of things.