What’s lurking around the dark recesses of your mind? 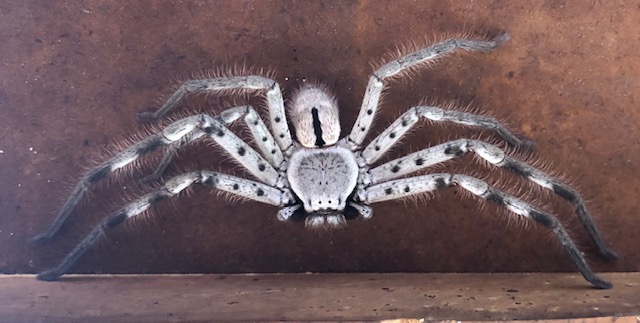 What’s lurking around the dark recesses of your mind?

It’s funny what you find when you start poking around in your shed or in your mind.

Just recently, I was asked to take on an Integrity Challenge. In this challenge, you create a list of tasks for which you have been trying to get a Round-To-It for a considerable period. You are asked to declare daily which of these tasks you will deal with and then to report back to an “Integrity Buddy” WHEN (not if) you have done the job! Well, one of my tasks was to clear out my sheds and Gumtree everything we didn’t want to keep. My buddy (not said Integrity Buddy) above also decided to show up, unannounced as a previously unknown to me resident of my shed!

He is a Giant Grey Huntsman, and he measures roughly 5 cm (2″) across when snuggled up and on the move, it’s closer to 10-12 cm (4-5″) across, and he’s harmless and so beautiful when studied close up I’ve nicknamed him George. This is Australia! Home to 9 out of the world’s 10 most Venomous Snakes and plenty of nasty spiders to go with them (check this out, Come To Australia). But this guy (or girl) is not one of them he just looks nasty. In fact, he’s more likely to be prey to an introduced species of spider (Daddy Long Legs) or gecko (Asian Gecko). Looks can be deceiving, and typically it’s because of the stories we make up about what we are seeing. Funny until we see it, it doesn’t matter, out of sight out of mind! Or is it?

George brought to mind another recent experience I have had with stuff that was out of sight and out of mind. He was the perfect metaphor for a bunch of STUFF that has been haunting me for the past 30 years. 30 years ago, this October, my older sister died of bowel cancer. I won’t bore you with the details but suffice to say I got angry and never dealt with the effect of her dying had on me until very recently.

It blew me away when it hit me. I thought “yeah I’m across all this stuff and I’m all good LOL” and then one day I wasn’t.

My emotional version of George came scuttling out. Unexpected and not particularly welcome. Not surprisingly, it drew a very emotional response (not unlike poor old George does). I had all sorts of stories about how and why it was scary and it came out of nowhere and really rocked my world. Lesson 1, we all have baggage and are all susceptible to it turning up unannounced on its own timetable and probably at a really inconvenient time. As a professional coach, I have the ongoing support of mental health professionals but did my “George” pop out conveniently when I was with them…NAH.

Fortunately for me, I was working with a highly skilled coach when my “George” turned up, and she was able to work with me as I worked my way through my stories. The scary ones I refer to above. As I spoke, she listened, and I was able to differentiate fact from fiction. The facts from the stories I had made up about my sister, her death and what that all meant.

I was able to work out why it was still affecting me 30 years on, and I was able to put that baggage down and move on. This despite subsequently being tempted to pick it up again several times after the fact as I spoke about my experience with family! Oh, and yes, I did take it to my head team as one always should.

It is always a story, good, bad or indifferent it is still a story. And often it IS NOT TRUE! By sharing my story with a skilled listener, I was able to “hear” what I was saying. Once I could “hear” my story, I was able to apply rational thought processes to it and work out fact from fiction. My “George” was not as scary as my mind had been making it for nearly 30 years. I had put layer upon layer of dust on my unresolved anger not being able to find the Round-To-It I needed to deal with it and eventually, in my conscious mind, I forgot it even existed. But I was still affected by it whether I remembered it or not!

Why am I telling you this?

I am telling you this because the results of dealing with this unresolved matter have been spectacular! In the past month, I have increased my coaching hours to the point where scheduling in the problem. I have the permission I need (from myself) to get out and live my life guilt-free, to be whatever it is that brings me joy. I can honestly say I am the strongest and most satisfied with life that I have been for those past 3 decades. The impact has been so good I’m off to see if there’s another “George” lurking around that I can deal with… I’ll be unstoppable!

What’s lurking around the dark recesses of your mind? What is it that is stopping you from reaching for the stars and enjoying the satisfaction of achievement? What is it that has you believe you are stuck? It’s all a story, it will feature goodies and baddies. It will have a plot and may even be running it in Technicolor through your mind or it might not, and you are at the effect of it. Your “George” will be running your Fear program much like the real George does, and like the real George YOUR “George” probably isn’t that scary at all… But it is as limiting as my “George”.

If you are ready to take the risk your “George” will come scuttling out of the darkness when you dare to change your life, that’s the essence of Andreia, the courage to do the right thing by yourself and others. To book a one to one chat and get YOUR “George” to scuttle away with the rest of them, click here!